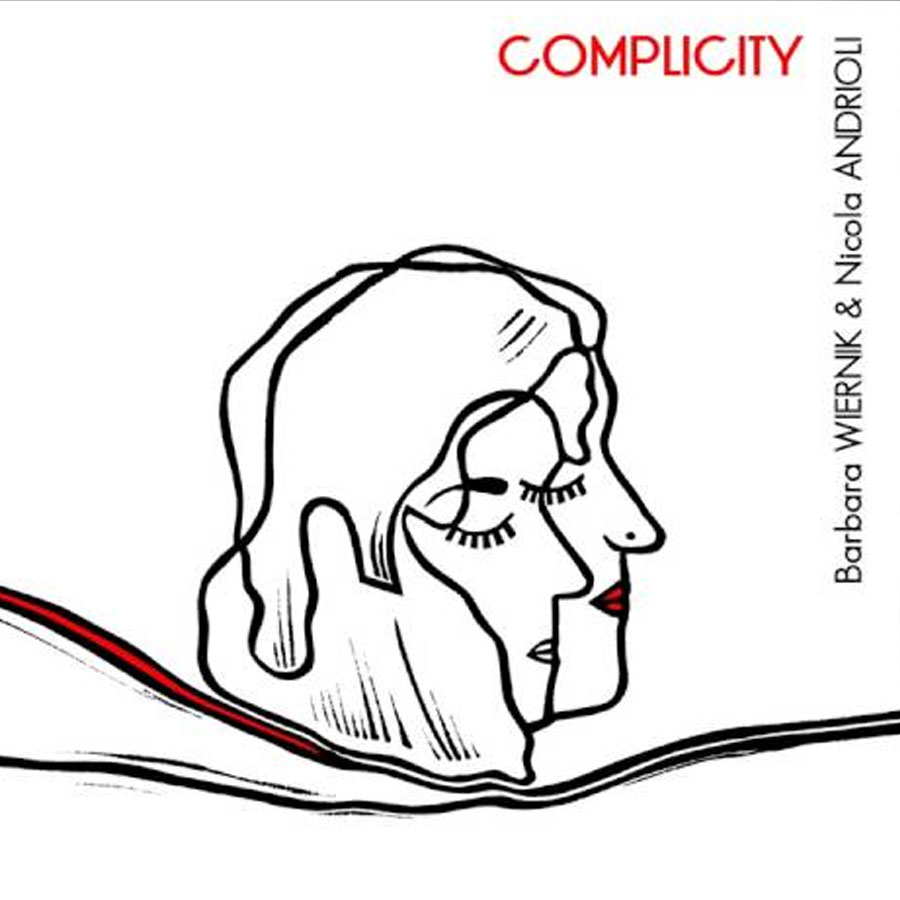 The two artists present COMPLICITY, their first joined album which offers us a melodious, luminous and airy vocal jazz with very contemporary tones.
They compose and play with the notes in order to make their music fit their image. With classical influences and a jazz technique resolutely modern, Nicola runs brilliantly his fingers on the keyboard with a disconcerting ease.

Barbara imagines stories and words that marry this elegant and colorful music. Her bright voice that instils her love for jazz and Indian sonorities carry a natural finesse that accompanies the piano's soaring notes.
In order to enlarge the musical spectrum of their album, they found three exceptional musicians who completed perfectly the musicality of their duo. The association of these five artists is astonishing and is placed under the obvious sign of a great complicity.

These original compositions take us on a incredible voyage and make us float on the invisible waves of moments of pure emotion and joy.

Antoine is Alain’s son. As such, he fell into his father’s magic jazz cauldron and grew up as a fan of jazz music of all times.

His musical path has led him so far through a large part of Europe and to New-York City, playing with key jazz artists (Philip Catherine, Enrico Pieranunzi, …)
He received the « Sabam Jazz Award 2015 » for young talents.

Everything he hears becomes part of his extremely personal musical language, and his playing enhances Alain’s compositions.

Barbara Wiernik is a singer, but not only. The lyrics and melodies she creates flow among different styles with astounding versatility. A vocalist for about twenty years, she has been in constant search of new sounds, which give her vocal jazz a very modern note. She uses her voice as an instrument, making melodies part of her own language and universe. Numerous travels, above all to India, enriched her music with various traditions she likes to juggle with. This has conferred her unique style a deep, subtle and powerful touch.

Her vocal musical pathway was marked by the teaching of, among others, Norma Winstone and David Linx in jazz and R.A. Ramamani in Indian singing. She also attended classes by Diederik Wissels, Kenny Wheeler and Kris Defoort, with whom she studied at the Antwerpen Jazz Studio and the Koninklijk Conservatorium van Brussel, where she graduated. Her experience also includes various training sessions throughout Europe, and in India for longer periods.

With double bass player Jean-Louis Rassinfosse and guitarist Alain Pierre, she founded a trio named « WRAP! », that published their first album, « Endless » (Igloo Records). The project « Les 100 ciels de Barbara Wiernik » assembled 13 musicians with jazz or classical background. Another project she is deeply involved in is her duet with the guitarist Alain Pierre, called « Different Lines ».

Her latest project is called COMPLICITY, with the Italian pianist Nicola Andrioli. In October 2016, they issued, on Spinach Pie Records, their first album, on which they had invited fantastic musicians (Manu Hermia, Marco Bardoscia and Antoine Pierre), and toured Europe and Asia.

Another facet of Barbara’s talent is her teaching activity, for jazz singing, improvisation, vocal techniques and polyphony. She is now mainly a teacher of vocal jazz at the Royal Conservatoire of Antwerpen, the international Summer Academy in Libramont and the jazz camp in Jodoigne. She also taught at the Conservatoire in Leuven, the Saint-Gilles Academy and in various training missions around the world.

General
Alain Pierre & Antoine Pierre and guests to be announced ...

Next events of our artists. All events...